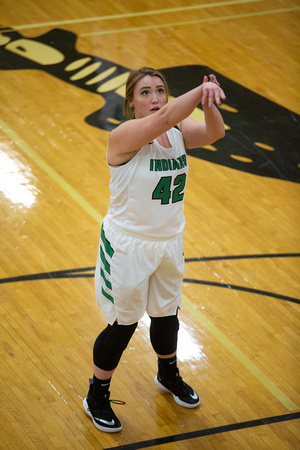 Whenever Lady Indian Basketball player Jillian Jones dons her jersey, it’s a reflection of someone special in her life who also played.

“My dad, Heath, played as well.”  Jillian stated. “He’s the one who taught me the game.”

Like many other seniors, this University of Tennessee hopeful began playing basketball at the age of five after having watched a few games and realizing it was something she wanted to be a part of.  Unsurprisingly, many friendships have resulted from her years of involvement.  When asked about her fondest memories of playing the game, she responded, “Just all of the relationships I have made with people over my years of playing.”

While dance, cheer, softball and basketball  have all been part of her experiences growing up, the #42 team captain admits that it’s basketball that may continue into her college years.   “I’ve kept it as an option.”  She replied when asked if she planned to continue playing.  “I’ve lettered all four years of basketball.  If given the chance to play for a pro team someday, I would choose Chicago Sky.  It’s the team that former UT player, Diamond DeShields, plays for.”

Currently a post player, Jillian explains her fondness for the game.   “I’ve always had a love for basketball and the way stuff translates into real life.  It has taught me how to deal with things and it has given me lifelong friendships.  I plan to be a coach myself someday.”

While Jillian is still putting some thought into her long-term goals, her short-term goals are rather clear.  “I want my team to make it to state and for us to keep improving girls’ basketball at Murray for years to come.”  She began.  “I also want to get into the National Honors Society, keep my grades up and ultimately get a good job.”

Jillian also confessed another very important goal.  “I want to make something of myself so that my parents will be proud for all the time they have given up for me to be able to do what I do.  My mom, Tara, does so much for me and for others and she doesn’t expect anything back.   With both myself and my little sister, Kenzie, playing, we’ve all gotten closer over the last two years, especially with me playing travel ball and having long car rides and weekends together.”

Jillian’s next game will take place this Friday evening, when the Indians host the North Murray Mountaineers at Murray County High School.  The game is scheduled to begin at 4 p.m.