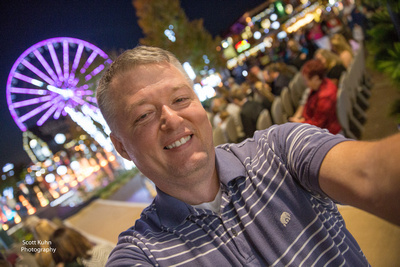 You might be surprised to learn that when you see this energetic, busy photographer on the sidelines at your child's game or devoting time to other various photography projects, that he is not at his full time job.  That description belongs to his position at Windstream, a company that he began working for 23 years ago as a customer service agent and, after several promotions (that at one point included acting as a supervisor of a 32 agent team), currently holds the title of Distributed Computing Consultant Telecom Engineer, a position that demands 45-50 hours of his time on a weekly basis.

Scott Kuhn Photography began in September of 2012 under the name of 'AGS Pics' at a local festival where we set up a photo booth, offering instant photo sessions and on-the-spot prints featuring a kid and family friendly autumn scene.   This humble beginning led to a few family and children's sessions and, as more people became familiar with his work, his business steadily increased.  That same year he requested permission to be on the local high school football fields where, to this day, he continuously improves his abilities in photographing sports action shots.  Much of his sideline work for all high school sporting events is made available to the respective schools for use in their yearbooks as well as to the Chatsworth Times for use in their sports column.  Since the 2015/2016 school year, Scott has served the portrait needs of several athletic teams at both North Murray High School and Murray County High School on numerous occasions.

Noteworthy activities include serving as the photographer of the Lisa and Paul Allen wedding, who's ceremony was featured on the March 4, 2017 season premier of the popular television show 'Say Yes to the Dress'.  One of Scott's images was also selected to be on a T-shirt for 'The Wall that Heals', which is a travelling replica of the Vietnam Wall in Washington DC.  Having a great respect for and interest in the armed services, Scott was honored to donate rights to use the image.  The t-shirts featuring the image was available for purchase both at the Vietnam Wall in Washington DC  throughout 2017, and remains available in limited quantities through the Wall website and at the D.C.  memorial.   His photography has also been used at various time for promotions by several local businesses, including Chatsworth Water Works,  Chatsworth Family Dentistry and the Chatsworth Police Department.  One of his images was also selected to be on the cover of the 2018 calendar distributed by Georgia Ag Farm Credit.   A few of his shots have also been used as the featured cover photo on the Facebook page of 'EarthSky' (with 1.2 million 'likes') on several occasions.

The fact that Scott considers photography a hobby more so than a career means that he is better able to serve his customers now and in the future by having a genuine, continuing interest in studying and practicing new techniques. If you see him out and about, you will usually find him with a camera in his hand, where he will often invite you to pose for a quick 'selfie' or goofy photo which will probably end up on your Facebook page (consider yourself warned :) ).

The Kuhn family feels being involved with our community is a position each of us can, and should, fill.  We host the Facebook Page 'Murray County/Chatsworth Ga Community Events', Provide free downloadable photos for the annual Christmas Parade Each year and volunteer for other occasions in which photography is needed.